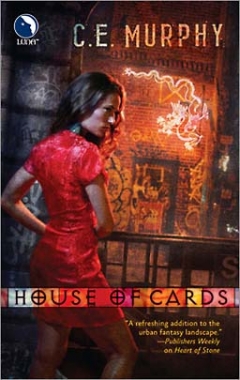 “How do you know these things about the Old Races?” He had no illusions that the power of his voice might stop her, but he asked regardless. “That two sips of a vampire’s blood brings long life, or that I chose Margrit over one of my own. I’ve told no one that. You’re not one of us, just a human wo—”

“Just.” Grace turned her profile to him, pale and sharp. “Now there you might have a problem with your lawyer lass, my friend. Humans don’t take kindly to being just anything.”

New York City’s only legal counsel to the fabled Old Races, Margrit Knight is levelheaded in all matters extraordinary. But when she’s summoned to negotiate a peace treaty among rival factions, her own mortal world threatens to fall apart.

Margrit’s been in hot water before, but reentering the underworld brings a new set of problems. And a new set of friends and enemies, including a ruthless vampire mobster, a dragonlord who won’t take no for an answer, a band of subversive selkies…oh, and Alban Korund, the sexy gargoyle who got her into this mess—and whose granite-strong touch still haunts her every fantasy…