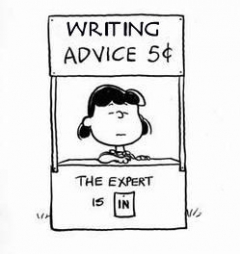 My latest question from the peanut gallery was about how I write synopses. Or at least, I think that’s what it was about: the entirety of the question, actually, was, “Synopsis?” :)

I’ve talked about writing synopses before at least once, in depth, as part of the Great Plot Synopsis Project (warning: that contains the entirety of the (2 page) synopsis for URBAN SHAMAN, and is therefore spoilery). However, that was written in early 2008, and I have Changed My Process since then.

Specifically, in fact, I’ve changed it in the past couple of years. Some time ago–maybe while writing MOUNTAIN ECHOES–I had an unusually good writing go, because I had an unusually solid idea of what I was doing. The same thing had happened with the Inheritors’ Cycle books, in fact, and I began to have a sneaking suspicion that having a thorough outline might be…*good for me*.

But I used to think that thorough synopses would suck the joy out of writing the actual book. Where’s the mystery! and all that. And, I mean, I knew my process: I would write to roughly the 1/3rd mark and hit a wall. I’d go back and revise, and make my way up to the 2/3rds mark. I’d hit another wall, and revise. Then I’d finish the book, so by the time I reached “the end”, I usually had a pretty darn solid draft.

Except on those three books, that one Walker Papers novel and the two Inheritors’ Cycle books, I really hadn’t hit those walls. I’d really kinda just blown through them, because I knew where I was going. So for four out of my five most recent books I’ve gotten more serious about the process, even though frankly, I hate synopsising.

MAGIC & MANNERS didn’t have an *exhaustive* synopsis, not the level I’ll be talking about next. OTOH, I was following (in large part, anyway) the plot of one of the most successful books ever written in the English language, so, uh. I didn’t really need to break that down too much.

But STONE’S THROE, BEWITCHING BENEDICT (an as-yet un-contracted-for straight-up Regency romance) and REDEEMER have all been synopsised within an inch of their lives. In all three cases I’ve relied heavily on my brainstorming group, and REDEEMER is going to be the most interesting test of this process, because it’s going to be, by a considerable margin, the longest of the three.

STONE’S THROE and BENEDICT were both in the region of 70K and had synopses of around 3K; given that the synopses I’ve sold on and used as my jumping boards for the past decade were generally around 1500 words for 100K books, that’s quite a jump in detail.

(The one book of the five most recent that I didn’t do a really thorough synopsis on was, incidentally, a miserable writing experience. It went through five painful drafts before I got to the end, and although it seems to work I’m still not strictly convinced it does. :[)

So I’ll talk about REDEEMER now. :)

For REDEEMER, I started out with a 1300 word synopsis. That would have been what I’d have sold to a publisher on, but it’s not the level of detail I was going for with this New Improved Process. After the Kickstarter, I picked up at the end of chapter 3 and started a new, more detailed synopsis from there.

Obviously I can’t show you any of this, because it’s full of spoilers, but what happened next was that I wrote an additional 2800 words, the first half of which was something story-oriented and the second half of which devolved into asking questions and trying to answer questions posed by my brainstorming group a long time ago. It’s full of things that are not synopsis at all but are worldbuilding thoughts and ideas.

I then brought that 2800 word mess to my brainstorming group, who threw out suggestions and answers to the questions, raised new ones, and sent me back to the synopsis board with many new thoughts.

The THIRD draft of the synopsis is 6200 (new) words long. It covers some of the same ground from the 2nd draft, has a great deal of random worldbuilding in it as well, and still doesn’t manage to really reach the end of the book. It gets most of the way there and then at the Big Finale it just basically goes SPLAAAAAAAAH I HAVE NO IDEA. I went back to the brainstorming group and frowned hard at commentary and struggled and fought with my brain until I figured it out.

The fourth and final draft of the synopsis finally makes it all the way to the end of the book. Interestingly, the reason I wrote the 4th draft was because I thought I’d be able to use the half-assed mess of a 3rd draft as my outline, but no. I needed it to be more formally, coherently presented in order to get any real use out of it. So it’s 7500 (new, if occasionally revised from previous versions) words long. It works out the action through-line. It works out the emotional through-line. It works out scenes on an (almost, we’ll see how it works out) chapter-by-chapter basis. It sets up points that will spring up in later books. It still asks questions that aren’t answered, but most of them are, and the places where they aren’t, well, that’s the room to breathe. That’s where the story develops in ways that will surprise and interest me.

So that’s 18,000 words I’ve spent wrangling this book into shape. I can literally see in the early versions of the synopsis where I would have had to stop writing the book and go back and fix things, because the questions and plot points that stopped me cold in the *synopsis* would have been at the 1/3rd and 2/3rds point of the book. Doing this has essentially forced me to do all the thinking ahead of time,

But here’s the thing: my average writing speed is about a thousand words an hour. With both BENEDICT and STONE’S THROE, I was hitting 1500-1900 words per hour *regularly*. BENEDICT, including the time writing an exhaustive synopsis, didn’t take more than 70 hours to write.

If this plays out with REDEEMER–and there’s some question with that, because I’m doing a couple of writing things with it that I didn’t/wouldn’t do with BENEDICT or STONE’S THROE–then this is a *hugely* sensible use of my time. It’s taken, I don’t know, 20-30 hours of work on the synopsis, but if I write the book in another 60 or 70? That’s a real win, in terms of time management. So I’m pretty excited to see how it goes, honestly. It’s an adventure!