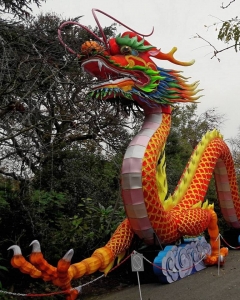 Young Indiana and I had a positively splendid, utterly exhausting bank holiday weekend while Ted was off gaming.

Saturday we defied the not-running trains to go to the zoo (a thing we would not have done if I’d known the trains weren’t running, but I didn’t find out until we got to the train station, at which point a bus was available, so…we went. Later than we intended, but we went.) We had breakfast out and went to the zoo and the lions were in fine form & I got the best picture of the crocodiles I’ve ever gotten:

and there were magnificent lantern sculptures which will be lit up in the evenings for the next two months’ worth of weekends, which will be really cool and I can’t wait to go to see it (we have tickets for the 10th).

Then we were invited, last-minute-like, to a friend’s Halloween party for her kids, and we went to that, which was lovely, and then we went and struggled to get home on the not-running trains, which involved being bussed out to Skerries and then put on the train that WAS running from there to Drogheda. By the time we got home we were utterly shattered but we’d had an astoundingly lovely day.

We started studying Irish together with DuoLingo, which is going pretty badly but we’re having a great time. We’ve done four days in a row! And Indiana’s doing the typing, which means it’s slow going but he’s learning to type and I’m genuinely impressed with how well he’s doing. He gets very annoyed with me if I tell him where the letters are, but he’s remembering them VERY well, so I’m trying VERY hard not to tell him. :)

Deirdre and her boys came out for dinner yesterday and since Ted was gaming I was forced to cook dinner! (Woe!) I made carrot, coconut milk & chickpea soup, which I’ve made before and which is very good indeed. I dug up a bunch of garden carrots and used them in it for texture (it’s a blendered soup, but I prefer my soup to have Things In, so I added chopped garden carrots, which were also colorful, so it was cool to look at) and everybody ate all of it, exclaiming over its numminess. And I fed them a loaf of Ted’s bread. :) And then the apple pie I made. So that was very successful.

Today we went to see the My Little Pony movie, which, honestly, I expected to be pretty decent and which was in fact pretty decent. Indy was THRILLED with it, and I have become such a smoosh it made me cry at some point, and I was especially pleased with the end, where they did something unexpected that really emphasized the importance of accepting people as they are. And then we went out to lunch and went to the play zone where he ran himself ragged for a while, and then we came home where Dad, to my great relief, played some chess with Indy while I…well, nominally I went to work but actually I read up on the Mueller indictments and the Papadopolous guilty plea.

Ted returned home, having had an excellent weekend himself, and we all sat around talking politics, a discussion in which even Indy managed to make some good points/observations, including the astonished exclamation, upon hearing that there are people who are SO RICH they didn’t really see other people’s problems at all, much less thought they had to help with them in any way, “But that’s SO SELFISH!!!!”

Anyway, it’s been a really great weekend and I’m utterly exhausted from it all.