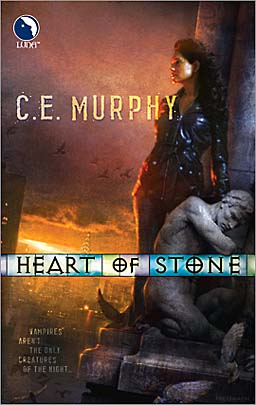 I’m re-reading the Negotiator Trilogy, which I haven’t done since (before) they were published. I’m doing this so I can write KISS OF ANGELS, which is set (at least partially) after the trilogy, and in some ways I have only a vague idea of what the books are about. I mean, obviously I know what they’re about, but…

Some of you may know that the reason I haven’t written more book-length Old Races stories is that writing the Negotiator Trilogy was…awful. Just awful. Like, I had a small nervous breakdown, writing the third one. The Negotiator Trilogy is 375K long; I wrote well over a million words trying to get there. (For reference, the complete Walker Papers series, including “Banshee Cries” and the NO DOMINION collection, is just under 1.1 million words.)

The second book got an edit letter 6 months late that said “please insert a plot into this book” (that’s not really what it said at all, but that was the solution to what it DID say). It had to be torn apart and a plot forcibly inserted, which required throwing out and completely rewriting about 2/3rds of the book…during the time I was supposed to be writing the third book.

Because the revision letter for book 2 was so late, I’d started WRITING the third book, but because book 2 had no plot, and because there was a character I really desperately wanted to introduce in book 3 who it turned out didn’t belong there, I could not get book 3 written. I wrote between 200-300 pages six times before I got it right, and by that time I doubted myself so much I literally brought the manuscript, in tears, to my husband and said “please tell me if this works at all.”

On top of all that, the copy editor didn’t like my writing style and rewrote huge chunks of my sentences, leaving me to struggle with correcting them (this was before copy edits were done electronically) and leaving errors that remain in the books to this day.

It was an *awful* experience, and it’s why I’ve only ever written short stories and novellas in the world again. Even so it took me years to even consider that.

So! I know what happens in the books, but…not very clearly, because so many versions live in my head, and besides that, it’s been ten years. To write KISS OF ANGELS requires some revisiting of the old material.

I have never, ever (due to the reasons ennumerated above) wanted to re-read the Negotiator Trilogy. I’ve been hoping that they’d turn out to be good enough that, a decade after the fact, they could at least draw me in a little and make a re-read a modestly enjoyable task instead of a sisyphean one.

I’ve just finished HEART OF STONE, and it turns out they are!

In fact, there have been sentences and phrases that, if another author had written them, I would have been envious of the skill and wordcraft there! (That’s a real moment of cognitive dissonance, lemme tell you. :))

Nothing in the story has really *surprised* me, but there have been a number of times where I’ve gone, “Oh yes, this is the thing that happens here, I remember that,” and also, “OH I SEE WHAT I DID THERE, MAYBE NOBODY ELSE EVER SAW IT BUT I SEE WHAT I DID THERE I’M SO FUNNY AHAHAHAH” because I’m a great big dork. *laughs*

One of the things that is *particularly* interesting to me is that I had to work very hard to write Romancy Sensual Sexy Reactions stuff in that book, and I felt like, god, SO heavy-handed, SO awkward, SO awful. But re-reading it? It’s really not any of those things. Which is just fascinating. I mean, I was, like, embarrassed at the heavy-handedness of it all, when I wrote it. (Yes, yes, this from the same woman who wrote THE QUEEN’S BASTARD, but that book didn’t go through the evolution that HEART OF STONE did. TQB was (almost) always supposed to be full of smut. :))

Another thing that I kind of knew but which is much more obvious on re-reading is that holy cats, the short stories have different versions–sometimes MUCH different versions–of the backstory mentioned in the book. Like, there’s stuff in the book that’s just plain wrong, if the short stories are to be believed. Which, IMHO as the author, they are. :)

The nice thing is I’m totally okay with that. I figure two things: One, all of these characters are at least hundreds and often thousands upon thousands of years old, and one can hardly expect anybody to remember the truth accurately over that period of time.

Second, and much more importantly, many of these characters are inveterate liars anyway, and should never be assumed to ever be telling you the truth. (I mean, seriously. You wouldn’t trust Janx or Daisani, would you? You *shouldn’t*, anyway.) :)

Anyway, so now I’m on to reading HOUSE OF CARDS, and I’ll blog about that while I’m finishing it! <3 -Catie 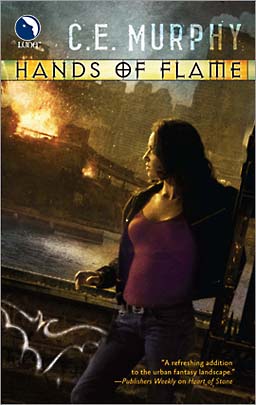 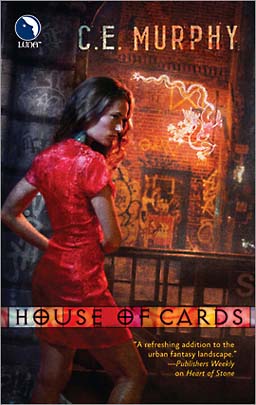